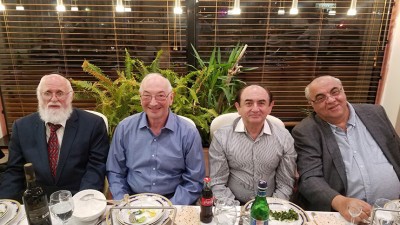 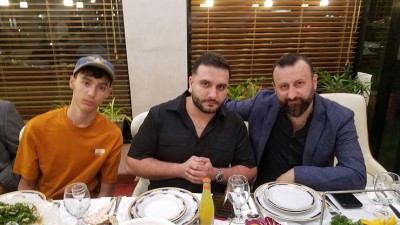 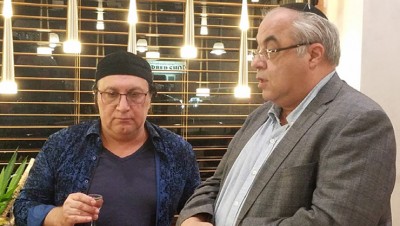 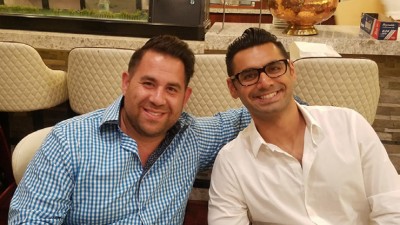 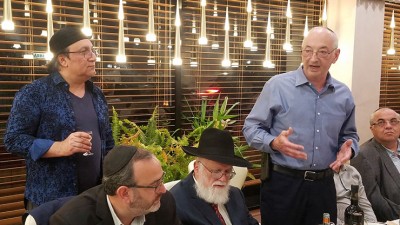 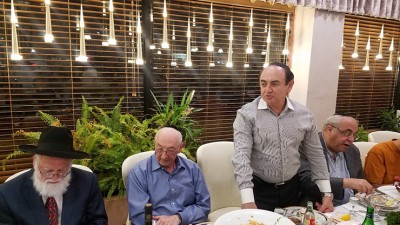 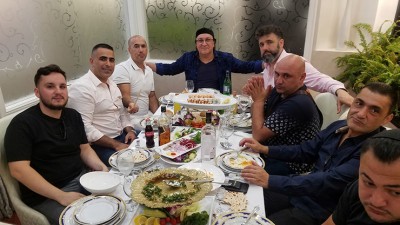 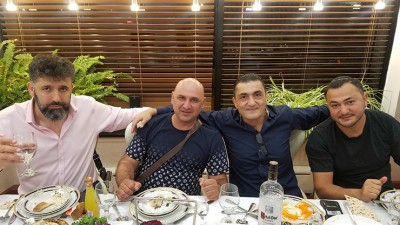 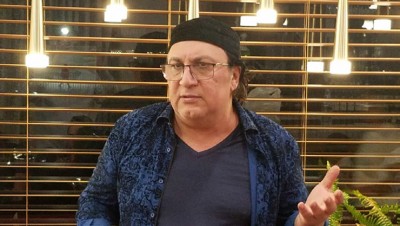 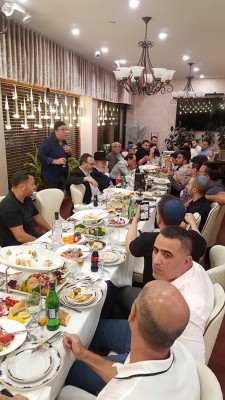 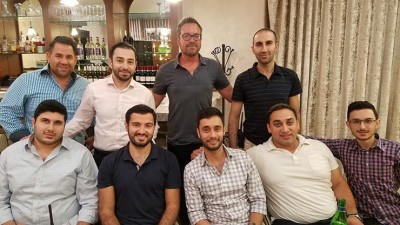 Hatzolah of Queens and Great Neck held an appreciation evening on Monday, August 16 to honor its devoted Bukharian volunteers. The program – held at Da Mikelle Corner Sushi & Steakhouse in Forest Hills – brought together longtime Hatzolah strongholds with donors and those who respond to the emergency calls. Hosted by world famous singer and entertainer Yuhan Benjamin, the gathering also showcased his friends and family and the work of his organization Yuhan’s Way in the field of substance and alcohol abuse.

The program, branded as a traditional “Plov,” was well received as it was part of the final wing in a project to raise $350,000 and bring a desperately needed ambulance to the Forest Hills / Rego Park area.

Mr. Shiu (Charles) Reichmann has been a proud Hatzolah member for the past 39 years, joining three years after the organization launched. Reichmann is no stranger to the Bukharian cause. During the first wave of immigration into Queens, Reichmann joined community leaders Yisroel Bloom, Yossi Hoch, and Itzi Laub, Dov Wolowitz to offer special classes held in various Queens yeshivot under the name Children’s Torah Foundation, and later Torah Academy of Queens, an elementary school and then Torah Academy High School. These budding askanim trekked through the many apartment buildings of the area to register youth to their programming.

On Monday, Reichmann related the origins of Hatzolah. He explained that it all began when Hershel Weber saw a neighbor having a heart attack and sought a means to avert such situations from becoming deadly. Weber purchased an oxygen tank and shared his personal number for folks to dial if somone was experiencing a crisis. Weber began by responding to these calls in his personal station wagon often dubbed by founding members as the “Cadillac GhostBuster.” Today, the vast Hatzolah network has expanded in terms of treatment options and has evolved as an organization to boast upwards of 80 branches worldwide. “Members are the Navy Seals of medics in this country,” said Reichmann.

To become an active Hatzolah member, one must first take upon themselves the journey to understand the difficult situations where they may need to respond. After becoming a medic, members begin by observing calls, and later backing up the responding EMTs. Once passing these hurdles, a member is upgraded to a provisional first responder and ultimately a first responder capable of responding to calls on their own. This arduous passage truly is the reason why a Hatzolah member is so special. In the words of Reichmann, it is the “heart of these people” that stands out the greatest because they give all that they have every time they lift their radio to respond, and they do not go out looking for recognition.

Many have discerned the emotions of Hatzolah members. Often the responding members become one with the family in need. In times of joy, they celebrate together, and in times of sorrow, they feel the searing pain. After all the members themselves are fathers, sons, husbands, and brothers, and they know emotions just like you and I. Now, for a moment, imagine you are at home and must step out for a couple hours, would you jump to run out? When a Hatzolah member hears their radio, they drop all that they are doing, be it the fork and knife at the dinner table, or a business conversation they just began. Then, once the call completes, they return to life and family like normal.

If something goes wrong in the dead of the night, Hatzolah members are on hand to respond. You can imagine, it is not so easy just to fall back asleep once they return and then set out for davening and work the next morning. Each member is also obligated to take upon themselves night shifts to ease these responses.

Hatzolah members are referred to as heroes because they never speak of the calls they take, and they lead their lives just like the guy next door, never letting their good deeds shine.

Dr. Oleg Fuzaylov is one of 18 doctors within his family to reside in the United States. His own son and daughter-in-law have also taken on this profession. He said that seeing Hatzolah members enter the medical field would bring him much satisfaction. Fuzaylov related how a Hatzolah had come to the aid of his parents in Kew Gardens and at his Rego Park office.

The doctor also explained how emergency services unfolded back in Russia. The same year Hatzolah began, Dr. Fuzaylov completed his medical school and residency; he was just 23 years of age. Straight away, the good doctor obtained his license and secured a job on an ambulance. At that time, each ambulance required an onboard doctor, but without any emergency medical training, Dr. Fuzaylov had his reserves. “I started, and step-by-step I learned,” explained Fuzaylov. “Here, I see how differently the ambulances operate, and how Hatzolah excels.” Fuzaylov noted that Hatzolah members take on a different approach in their speech and mannerisms with each patient they care for, adding, “For some reason, you are different.”

Dr. Fuzaylov, like Reichmann, is a resident of Kew Gardens, but Fuzaylov has had the unique opportunity to see the daily ongoing activities of the organization as his home is situated near the Hatzolah garage. “I am proud of the work of Hatzolah, and so proud to see so many young Bukharian guys helping in the organization.”

“To be a team is very complicated, but you guys do a great job!” exclaimed Yuhan Benjamin, founder of Yuhan’s Way, a non-profit created to assist Jewish youth struggling with drug and alcohol addiction. To combat the rising opioid crisis, Yuhan’s Way offers progressive volunteers that help those struggling to move past their addictions and focus on ethnic relationships while establishing common ground. This methodology has assisted over 100 youth in opening up about their toils. Yuhan’s Way has connected these youth with NYC-based outpatient clinics and with inpatient clinics worldwide. “We all know someone that was taken from us way too soon due to an overdose. We must come together as a community, join efforts and help to battle this vicious disease,” stated Benjamin.

I asked Benjamin what instigated his fondness for this lifesaving group. “I want to be attached to the work of Hatzolah,” explained Benjamin. Calling the members “angels of life,” and “real angels of God.” Benjamin enlightened me on their rescue efforts that saved his life a mere three months ago. Nine years ago Benjamin also experienced Hatzolah’s helping hand, but had then been unaware of the associated volunteerism. “I saw how hard the members worked and I wanted to be part of the cause to give back. It is a huge privilege to be part of their lives and their job.”

Simon Borukhov echoed Benjamin’s sentiment in his recollections. “I also worked in an ambulance and you really are angels – Jewish angels,” commented Borukhov. “For me Hatzolah is number one. Many times, we would call. To see members who made the choice to join out of free will is quite special.”

The program also included acknowledgement of the Bukharian members. Amir Tabibi is now part of Hatzolah just shy of three years. “I joined to help and make a difference,” said Tabibi who undertook a significant portion of the campaign for the new local ambulance. As a Rego Park resident by 62nd Avenue and 102nd Street, Tabibi found the drive to the Young Israel of Forest Hills Hatzolah base quite cumbersome. “Often, I would have to drive out to Forest Hills only to return with an ambulance back to the same blocks I just left. We felt the necessity to have a new ambulance with easier accessibility for our area.” The new ambulance is set to serve a wide range of neighborhoods including Astoria, Corona, Elmhurst, Forest Hills, Glendale, Jackson Heights, Long Island City, Rego Park, and Woodhaven. Tabibi’s colleagues praised his efforts to raise upwards of $30,000 and said that he will widely benefit from the new ambulance as this is his neighborhood. “Amir often responds to emergencies in his own community,” noted one member at the gathering.

“The members thank Yuhan and appreciate the recognition,” remarked Michael Shalomov, a Forest Hills based Hatzolah member and Beth Gavriel Community Center member. In addressing the audience in both Russian and English, Shalomov noted, “Jews are here to help one another, and labels are not important, because we are k’ish echad b’lev echad.” The phrase means that we are as a solitary unit with one beating heart and more importantly we are stronger and bigger as one.

Yisrael Yusupov, the current youngest Bukharian Hatzolah member, joined his contemporaries in July of 2019. “I wanted to help others and give back to the community,” Yusupov explained, point blankly. He lives in the Kew Gardens Hills neighborhood where new Bukharian-oriented shuls, schools, businesses, and programming pop up daily.

Boris Kaykov attended with his nephew Uriel Kaykov who single handedly raised over $40,000 toward the new ambulance garnering the real guest of honor attribute for the evening. “The Jewish community really needs Hatzolah. It’s the number one group to support, said Boris. “What other organization can come out and save lives in the same way?”

Sruly Lowy, a longtime Hatzolah coordinator, stated powerfully, “The donors with us here have given of your valuable time to honor the members with every fiber of your being. You have spoken from the heart, and these words will be the fuel in the gas tanks as they set out on emergency calls.”

The event was also graced with the presence of Rabbi Yechiel M. Nakdimen, Director of Development, Hatzolah of Queens & Great Neck, who speared the organization of the program, and by Hatzolah members Yossi Davidov, Ariel Gilkarov, Daniel Kariyev, Benjy Kolangi, Alex Malakov, Avi Stern. Emanuel Fozailov and Netanel Yakubov were expected to attend but were unable due to a Hatzolah call at the start of the program. Together, they ushered a severely dehydrated missing person to the hospital that had recently been brought home to safety. Hatzolah is funded through crowdsourcing. Donations can be made at rayze.it/queenshatzolah.